How has the Mediterranean diet achieved such significance in cancer care? How does it impact breast cancer recurrence?

There are many sources citing the benefits of the Mediterranean diet but one source does it really really well!

Braakhuis, et al, in Nutrients: Sept 2016 executed a comprehensive review of dietary factors that affect breast cancer recurrence. I will summarize that review as concisely as possible and add a couple tips that I have found.

The Mediterranean diet, which consists of more than 5 fruits and vegetables daily, moderate soy intake of around 5-10 g/day, olive oil, fish, and minimal amounts of red meat or fried fare, is recognized as the best diet for cancer survivors. In addition, it promotes weight loss and helps with many heart conditions.

Unfortunately, studies show mixed results regarding breast cancer recurrence. Thus far, there has only been a benefit for patients who lost weight. In vitro studies (using cultured breast cells), however, do demonstrate anti-cancer effects through many of the mechanisms below.

The Mediterranean diet is rich in polyphenols, which act as antioxidants (by reducing reactive oxygen species -ROS) and in receptor signaling. They act as antioxidants either directly or by increasing the production of antioxidant proteins. Polyphenols also decrease cancer cell proliferation, block pro-inflammatory cytokines and activate transcription factors (that control the transcription of your DNA) to reduce chronic inflammation, increase histone deacetylase activity (to stabilize DNA), interfere with tyrosine kinase activity as well as estrogen receptors (inducing cancer cell death).

The Western Diet, on the other hand, promotes inflammation through mediators such as kappa beta, tumor necrosis factor, and cyclooxygenase-2 (COX-2). Of note, COX-2 may be an important inflammatory mediator that is modulated by polyphenols. Aspirin is an irreversible COX-1 and COX-2 inhibitor. It also reduces mTOR. Please see my blog on that topic.

This gets a little technical...

Phenolic phytochemicals (1) increase anti-inflammatory genes such as superoxide dismutase (SOD), glutathione peroxidase (GPx), and heme oxygenate (HO)-1 by activating transcription factor nucleus factor-erythroid 2 (NF-E2)- related factor 2 (Nrf2) and (2) act as free radical scavengers. (3) Protect DNA from damaging carcinogens. Lee, et, al. found 6 different single nucleotide polymorphisms (SNPs-which are involved in DNA repair) that were associated with the development of TNBC, could be modified by folate, zinc, and beta carotene. The effects were additive. As an aside, many germline (inherited) mutations in DNA mismatch repair genes are associated with breast cancer susceptibility (BRCA1, BRCA2, CHEK2, ERCC4, FAAP100, and others). (4) Polyphenols may also change methylation of promotor regions that act upon the DNA to protect against DNA damage. Researchers found that polyphenols from blueberries inhibited TNBC cell migration, proliferation (growth), and metastases in mice.

Plants from the order Brassicales (Cruciferae) contain glucosinolates, which are sulfur-containing compounds that are also known as mustard oils. It is these compounds that impart the smell and taste of cruciferous vegetables. See britannica.com. They also contain epigallocatechin-3-gallate (EGCG). These substances have strong anti-inflammatory properties and act as chemoprevention to breast cancer cell lines by inhibiting cell growth and division, telomerase activity, and human telomerase reverse transcriptase (hTERT) gene expression, which is only found in cancer cells. Lignins (flaxseeds and sesame seeds) and stilbenes (peanuts, red wine and other foods with resveretrol) have large amounts of phenolic phytochemicals. People with high intakes of these had a reduced overall risk of mortality. Please also see Polyphenols: What are they and why you need them at the Mercola website. Foods and spices that contain the most polyphenols according an article, sited by Mercola (above) from the European Journal of Nutrition include: Cloves, Peppermint, Star anise, Raw cacao, Mexican oregano, Celery seed, Dark chocolate, Flaxseed meal, Black elderberry, Chestnut seeds, Dried sage, Rosemary, Spearmint, Thyme, Blueberries, Blackcurrant, Capers, Black olives, Hazelnuts, and Pecans. 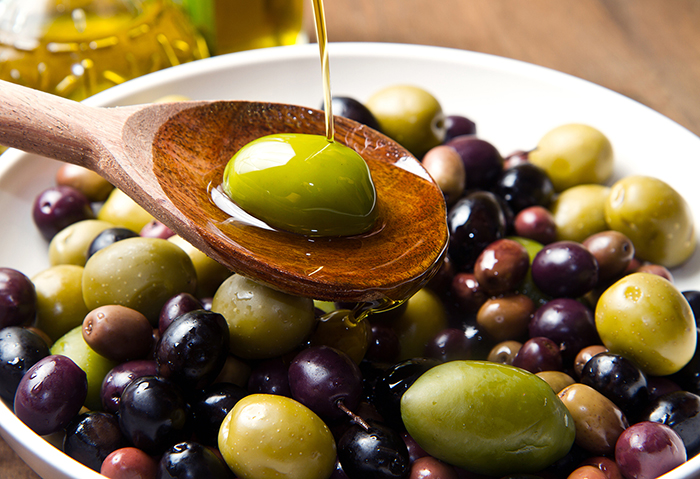 The benefits of olive oil are now attributed to its polyphenolic content, namely oleocanthal, which selectively kills breast cancer cells. However, not all olive oil has a large enough amount of this. Oleocanthal gives the oil that "throat catch" sensation when swallowed. Also, the more pungent and peppery, the higher the level. When formally tested via nuclear magnetic resonance at UC Davis, olive oil from Koroneiki, Greece, had the highest content. See Olive Oil Times. According to BestOliveOil, high levels were also found in the Greek olive oils from Throuba and Amphissa. The author stated that the olive oil must be cold pressed at 27C or less because heat drastically lowers the content of oleocanthal and oleacein. Green early harvest extra-virgin olive oil that is cold pressed should be a good place to start in addition to trying some brands that tested positive for the throat catch effects (Caravelle, Colavita 100% organic, Frantola, Newman's Own Organic, Whole Foods 365 100% Italian and Whole Foods Arbequina Cold Processed). Please see designed2win for more on that. I found some cold pressed extra virgin olive oil from Koroneiki at Trader Joe's, too.

Other dietary sources of polyphenols

Another source of polyphenols is coffee. Coffee polyphenols change the expression of ATF-2 and STAT 5B, which modifies cyclin D1 in cancer cells. However, coffee also contains acrylamide, which could have a carcinogenic action.

Flavonols or flavonoids are a major subgroup of polyphenols that are found in tea, many fruits, onions, broccoli, lentils and beans. Some flavonoids are quercetin, kaempferol, myricetin, and isorhamnetin. Research has demonstrated an inverse relationship between bean and lentil consumption and breast cancer. They are thought to likely be protective of breast cancer.

Isoflavones such as genistein, daidzein, and glyciltein act as natural estrogen receptor modulators that inhibit breast cancer cell growth in vitro. They are found in non-fermented soy products such as soy milk and tofu may be protective against breast cancer.

While human data is limited, I try to incorporate many of these foods in my diet on a daily basis with hopes that they will help me to fight this disease. They may also reduce the development of secondary cancers. I've recently added strawberries to the list following a recent mouse study! Please see my post on FB and my blog on mTOR inhibition!

Should I Eat Meat? This and Other Dietary Questions for Patients with Triple Negative Breast Cancer